Co-chaired by Darren Henry MP and Lord Ravensdale, the group is a cross-party forum for MPs and Peers based in, or with an interest in, the Midlands. 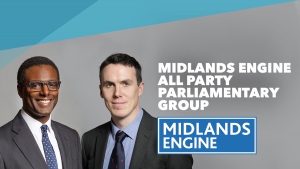 The work of the APPG will be underpinned by regional research, data and analysis from Midlands Engine Observatory. The Observatory’s work is crucial in evidencing the barriers to growth which the region faces and in highlighting scope for powerful interventions. The regular reports provided by the Observatory – including the Covid Monitor, LEP profiles and Quarterly Economic Commentaries, in addition to set piece research – together constitute a huge and unparalleled data resource focused on the Midlands Engine region.

I was delighted to be invited to address the Midlands Engine All-Party Parliamentary Group. It is extremely encouraging to see the level of engagement from parliamentarians of all parties from across the region.

We work closely with partners and stakeholders across the Midlands – our regions MPs and Peers as local champions do a fantastic job of highlighting causes which will support their constituents – and I hope that the Midlands Engine APPG will become a vehicle for highlighting the interventions we know are necessary to support levelling up the Midlands economy in every part of our region.

I look forward to working closely with the Midlands Engine APPG in the future to support key Budget asks, create a forum for discussions on the next stages of devolution in the UK, and raise the bar for our region in the sphere of international trade.

Future meetings of the Midlands Engine APPG will take place regularly and will be advertised in the Parliamentary All-Party Notice.

An opportunity to develop the UK supply base of the NHS

A new report commissioned by the Midlands Engine from the Manufacturing Technology Centre has identified the key company capabilities that allow businesses to transform their operations in order to successfully enter the healthcare sector and competitively deliver innovative products and services.

Minister for Science, Research and Innovation speaking yesterday [18 May] on the occasion of the launch of the Midlands Investment Portfolio by Midlands Engine partners.

The Midlands Engine partnership has launched the Midlands Investment Portfolio – a ‘digital front door’ opening up investment opportunities across the region. Taken together, it is estimated these opportunities could support or create a staggering 220,000 jobs and deliver more than £33bn in Gross Development Value.